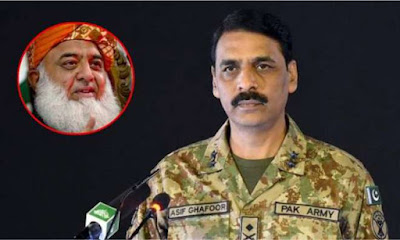 Accusing the streets will not solve the problems. No chaos in the country is in the interest of the country. We will not allow anyone to harm the country. Major General Asif Ghafoor said that the army was always within its constitutional and legal boundaries. The military supports the democratic government while still within the constitutional and legal boundaries and is still supporting the government.
The army is a neutral institution and the army also fulfilled its constitutional and legal responsibility in the 2018 elections. More than a year has passed since the elections, but if the opposition has reservations, take your concerns to the relevant institutions. Major General Asif Ghafoor further said that at present one lakh army of Pakistan is performing duties on the eastern border, any aggression of India will be answered in the end. The nation succumbed to terrorism, which no other nation and army could do. The stability of the country will no longer be allowed to do any harm. It may be recalled that Maulana Fazlur Rehman had earlier given the ultimatum in the event of threat to the institutions to stop supporting the government.